High end Mid Century Modern galleries, vintage shops, and second-hand furniture stores are seeing a huge uptick in demand for postmodern furniture and housewares. Postmodernism is having a moment… well really, it’s been having a moment for the past several years. Furniture trends much like fashion in a cyclical way, and I suppose it was really just a matter of time before the bold neon, faux bois, and funky designs of the 1980s and early 90s made a comeback.

I’m definitely a huge fan; but I’m not going to lie—when I first got my start in the furniture industry, I was less than impressed with postmodernism; especially with one movement in particular, Memphis Milano. (Sometimes the design movement is referred to simply as “Memphis” or “The Memphis Group.”) But first, let’s take a step back. What is postmodern anyway, and what does it have to do with Mid Century Modern?

Furniture designed in the mid century, roughly late 1940s-1970s is considered Mid Century Modern, and postmodern has a slight overlap with its designs—ranging from the late 1970s through the 1990s. 1970s furniture design still relied mainly on Mid Century Modern minimalism (say that 10x fast) of the 1960s; and as the grooviness of track-suits and bell-bottoms was rapidly fading, so was the design aesthetic.

Younger furniture designers, architects, and artists were on the verge of explosion, and modern design would never be the same. The 1980s postmodernism movement was really a passing of the baton of sorts. Greats like Frank Ghery and Zaha Hadid were on the cusp of emergence; but no one movement could really define the 1980s and 90s aesthetic quite the way Ettore Sottsass and the Memphis Milano group did.

The first time I saw Memphis Milano design I was at an auction in Los Angeles and happened upon a Michael Graves Plaza Vanity and a Peter Shire Bel Air chair. At the time I thought they were hands-down the most over the top, outlandish furniture designs I’d ever seen.

After my first unfortunate encounter with Memphis design I had my second encounter a couple years later when I was out shopping at a consignment store. I found a super “pop-y” console table with a matching mirror. It was really funky for me, but I was inexplicably drawn to it. The console table was strikingly familiar; it was a Gerrit Rietveld Schroeder table that had been reimagined as a flattened, modernized console table with a matching asymmetrical painted mirror that had Roy Lichtenstein vibes for days. This was the piece that sent me down the rabbit hole. I became a Memphis-aholic.

The Memphis group, contrary to its name, was not created in Memphis. Ettore Sottsass and a group of young influential designers gathered for a night of cocktails and design in Sottsass’ Milan apartment in December of 1981. The tale goes that while sharing their designs and jamming out to Bob Dylan, “Stuck Inside of Mobile With the Memphis Blues Again” started playing, and when the song got to its chorus, the record skipped, repeating “Memphis” over and over. Just like that, the Memphis Group was born.

The next year the Memphis group exhibited at Salone del Mobile in Milan and while the show’s attendance was a huge success; the furniture’s commercial sales were not. This was a trend for the Memphis group, incredibly huge crowds and lackluster sales.

Memphis design was a shock to the system for the early 1980s—which was still heavy into 1970s minimalism. Memphis sought to buck this trend completely with maximalism to the extreme. Memphis incorporated mixtures of design elements never seen before, mixing marble with wood, laminates, plastics, bold patterns and asymmetrical shapes. The Memphis Group reimagined furniture design as functional artwork and made it fun and exciting in a whole new way. For all intents and purposes, the members of the Memphis Group were really the founders and pioneers of the 1980s aesthetic.

Sadly, Memphis Milano lasted only around seven years before they disbanded, but whether they knew it at the time or not, Memphis design would influence and inspire decades of art and culture.

Today’s current resurgence of popularity doesn’t seem like a coincidence to me. My theory is that people tend to decorate with pieces of furniture that make them feel happy at home. As an older millennial, I grew up watching Pee-Wee’s playhouse crafting tin-foil balls, eventually graduating to crushing over Zack Morris. MTV was TV. Ahh Real Monsters was my favorite Nickelodeon cartoon, and character design should obviously be attributed to the Memphis Group (joking, not joking).

Memphis furniture oddly feels like home to us 30-somethings, and now that we can afford it, we can’t find it; which is only further propelling this postmodern design trend. That nostalgia force is strong, and while Memphis design may have been ahead of their time in the 80s, their staying power is undeniably influencing art and culture today.

Long story short, it would be safe to say their design was never meant to be “stuck inside (Salone del) Mobile with the Memphis blues.” Nobody puts Memphis in a corner. 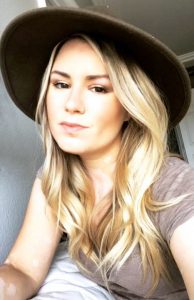 Malena Brush has owned Mid Century Modern furniture galleries in CA, NV and AZ. She currently owns and operates Habitat Gallery, a luxury Mid Century Modern furniture gallery in Tempe, AZ. After graduating with a BA in communication, she waded into the world of modernism and never looked back. She now spends her days buying, selling, and researching modern design. She can be found on 1stdibs, Chairish and Instagram @habitat_gallery.

8 Area Rugs to Bring Color to Your Space

Andrew Cooper: A Rising Star in the Art World