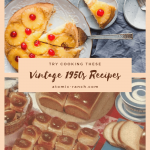 Yes, we know that the mid century was known for not-so-savory foods like frozen fruitcake salad and Jello + tuna salad (yes, that really was a thing). But also remember your mom’s amazing meatloaf recipe that she got from her aunt, or the apple streusel your grandma made every Christmas growing up? Here are some classic (and delicious) vintage 1950s recipes for you to try at home!

Waldorf salad has been a classic since the early 1900s—it was invented in 1896 and named after the famous Waldorf-Astoria hotel in New York. This rendition from Taste of Home has the traditional combination of fruit, nuts and mayonnaise dressing.

Deviled eggs are a mid century classic, but check out this stuffed deviled egg recipe, straight from a 1950s vintage recipes card. Admittedly, the green pea-infused deviled eggs are a little weird, but the tuna fish infused version doesn’t sound too bad! Get a full review (and written instructions) from Retro Recipes.

Looking for other salads to add to your repertoire of vintage 1950s recipes? Antique Alter Ego has posted a collection of salad recipes from the book A Picture Treasury of Good Cooking from 1953. If you’ve ever wanted to try making a Caesar salad from scratch or a Cobb salad the original way, now’s your chance.

Is potato salad considered a side dish, or a pre-dinner dish? Either way, it’s one that was prevalent in the ’50s and ’60s. Here’s a classic version of it by From Valerie’s Kitchen that’s bound to be delicious.

Another side-dish-maybe-salad, coleslaw is typically made with lettuce and other salad fixings, then doused in a mayonnaise-based dressing. This one from Gather for Bread is her recreation of her grandmother’s homemade coleslaw—a true vintage dish to try with your other vintage 1950s recipes.

You can’t have a good stash of vintage 1950s recipes without a cocktail or two. And the sidecar has been around since the 1920s, so it’s the perfect Mid Mod cocktail to make for your next in-home dinner party or celebration. Try this version by Serious Eats.

This one comes straight from the great French-American homemaker cook from the mid century era. Can you guess who? Julia Child, of course! This is the French onion soup recipe from her Mastering the Art of French Cooking from 1961, via Julia Child’s Recipes.

Many Swedes emigrated to the US in the 19th and 20th centuries, bringing Swedish dishes with them. These Swedish meatballs are a classic, and were popular during the mid century era. Check out Taste of Home’s recipe here.

Another dinner dish from Julia Child’s Mastering the Art of French Cooking from 1961 is parmesan chicken. It has a brown butter sauce to top it off. Check out the recipe (and eye candy photos) at Catz in the Kitchen.

Chrissy of the blog Dear Chrissy makes her meatloaf just like her gramma did– in a cast iron skillet. She’s posted the meatloaf recipe so you can get an authentic, old-fashioned meatloaf to add to your vintage 1950s recipes.

Not gingerbread cookies or men—no, this is the real thing. Soft, moist bread with hints of ginger and molasses. It makes a great dessert bread, but you can also hide it as a side dish if you have a big sweet tooth. Head to Baking a Moment to get the recipe.

It’s no surprise that pasta casserole’s are ubiquitous with the 1950s. It’s around this time mac and cheese became popular. And with cans of cream of mushroom soup as a staple in many american kitchens, it didn’t take long to come up whit this potluck staple. The Food Cafe has a recipe that doesn’t stray far from the original, with ingredients that are store-bought and easy to get.

Chiffon pies were all the rage in the midcentury. They were eye-catching and over the top and a go-to for “fancy” orders.  Lemon chiffon is a little different from lemon meringue—unlike the stiff topping of the meringue pie, chiffon is softer, airier and has a sweeter taste. Learn about the nostalgic mid century roots of this dessert at Saveur.

Ok, we’re entering Jello territory here. But though peach parfait pie uses gelatin, it’s not the Jello salad that tends to mark the weird dishes of the 1950s. This one instead is a sweet treat, with raspberry gelatin paired with peach ice cream and a flaky pie crust. Doesn’t sound too bad to us! Check out this vintage recipe at Antique Alter Ego.

Another mid century classic, the pineapple upside down cake would be a great dessert for a tiki-themed birthday party or when you want to match your dessert to your tiki-themed barware. This version by King Arthur Flour bakes the cake in a cast iron skillet.

Want more vintage 1950s recipes? Try these five vintage recipes to satisfy the munchies. And if you’re drooling over that pineapple upside down cake, try making your own version of the Dole whip from Disneyland’s very own Tiki Room!