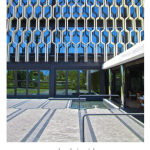 When Honolulu’s iconic IBM building opened in 1962 as the computer giant’s Hawaiian headquarters, it was met with derision by some people who thought it too austere to fit in with the island’s natural beauty. However, the simple brise soleil-wrapped cube also garnered architectural accolades including an honorable mention in 1964 from the American Institute of Architects (AIA) Design Awards, Hawaii Chapter, for its architect Vladamir Ossipoff.

Ossipoff, who was born in Russia and emigrated to the United States—settling in Honolulu in the 1930s upon graduating from UC, Berkeley—would become a leader in the mid-century architectural movement known as tropical modernism during Hawaii’s post-war boom years, for which the IBM Building would later be singled out as a prime example.

The iconic six-story office building is best known for its unique concrete honeycomb facade; a Polynesian inspired brise soleil that was assembled from 1,360 separate precast pieces designed to keep the structure cool from the tropical sun, as well as to look cool—resembling the automated punch cards synonymous with the computer industry at the time. The unique angle of the building’s grille was also designed to be water and pigeon-proof while still allowing for sweeping ocean and mountain views from its offices within.

The IBM Building actually grew on people over the years, while still remaining unique within its environment, so when it was slated for demolition in 2008 as part of a redevelopment plan, avid preservationists and the community mobilized to save the historic building.

Developer Howard Hughes Corp. spent over $20 million to renovate and repurpose the property and it now serves as a gateway to the company’s overall master plan for the Ward Village area in the Kaka’ako neighborhood.

Ironically, the IBM Building’s iconic sign was removed from atop the building earlier this year after IBM closed the last of their offices.

To learn more, in person, Docomomo’s next US National Symposium is being held in Honolulu between September 25–28, 2019, in collaboration with the Docomomo US/Hawaii chapter. The 4-day event will feature a Vladimir Ossipoff bus tour.

Ken MacIntyre is the creator and curator of Modtraveler.net, an Enthusiast’s Guide to Modernism. For more photos and stories of modernist destinations visit his website or follow Ken on Instagram @modtraveler.