In Buffalo, New York above his Funky Town Vintage store, Martin McGee’s office houses his curated collection of Space Age decor and furniture. An enthusiast, collector, and advocate of Space Age design–a subset of Mid Century Modern that continues to look futuristic–Martin has filled his office with treasures from the age that aimed for the stars.

Most collectors can tell you an object’s story. Martin can tell stories of each object in his office, and their stories interest him because of the Space Age’s story–the design, the clothes, the drive to innovate and reach the moon and Mars–fascinates him. The USS Enterprise sits beside a collection of Soviet “commemorative enamel space pins. Each one is a unique miniature piece of art,” he explains. The era of the Space Race, space travel loomed large in the popular imagination, and the artifacts of the era certainly exemplify this.

As Martin mentioned in an earlier interview, the era’s fascination with space travel influenced design. Spheres, elliptical shapes and materials like chrome and plastic rather than wood became popular in the Space Age’s heyday.

As the name of his store indicates, Martin has an affinity for the unique and unusual. Many objects in his office he describes as “rare” or “unusual.”

Take, for instance, the cone-shaped frosted glass piece that at first glance looks like a lamp. Martin explains, “Actually it’s a VERY tall frosted glass piece.  I picked it up at a local flea market.  It’s lit by the pedestal it’s sitting on.”

An Ode to the Space Age

Martin’s office as a whole is a veritable ode to Space Age design, but this corner in particular looks like the stuff of science fiction. Martin discusses the Audiorama speaker’s shape and design here. The table lamp on the right side table is a Flemming Brylle & Preben Jacobsen Table Lamp from the 1960s.

And the poster has a story as well. Martin relates, “I enlarged the May 1966 Harper’s Bazaar magazine cover (used my original copy) for my April 2013 Buffalo, NY exhibit to exemplify Space Age fashion.  The outfit is styled after an astronaut’s space suit and helmet.  The model’s finger is touching and drawing attention to an unusual armband watch.  I tell people it’s my mother.  Ha, ha just kidding.” 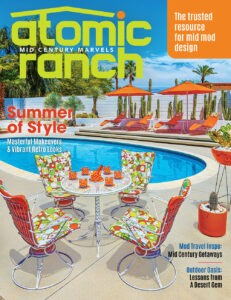 Want to see more of Martin’s Space Age office? Find it in our Summer 2021 issue of Atomic Ranch!

For more office inspiration, see Put Your Space to Work: A Roundup of Home Offices.

The Concrete Facts: Tips for Refinishing Your Concrete Floors

A Style Guide for Your MCM Kitchen