Meet the vintage hunters who curate great collections of Vintage Mid Century finds in the Southwest area of the US.
Written by Malena Brush Posted May 20, 2020
PIN
SHARE
TWEET
Linkedin
Email 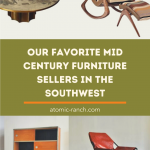 One of the most rewarding aspects of buying vintage furniture is that every piece has a unique story, and so do the dealers that find and sell them. Serial workaholics, these dealers eat, sleep and breathe modernism—as a lifestyle. These are five vintage mid century dealers we’re following in the Southwest, and how they got their feet wet in world of mid century modernism along with some peeks into their  unique in their buying practices that you might be able to glean something from.

Dex Hamilton has always had a passion for modernism. While running a creative agency in the early 2010s, his collecting really took off and though his love for modernism was soaring, his career at the creative agency wasn’t quite giving him the same satisfaction. By 2013, he threw caution to the wind and opened up Automaton in Culver City. Automaton has since evolved from a side hustle hobby to a full-blown business. Dex recently moved his showroom to downtown Los Angeles and currently houses over 20,000 square feet of mid-century modern furniture and décor.

A self-proclaimed lover of labels, Dex considers himself, first and foremost, a collector. He values each of his furniture pieces as functional works of art, and as with art, he places a huge value on authenticity. He always errs on the side of caution and rarely buys any item without proper labels or authentication.

While focusing mostly on mid-century modern furniture, Dex also dabbles in art deco and is seeing buying trends in postmodernism. His specialties are in American modernism, like Philip and Kelvin LaVerne pieces, and sourcing hard-to-find Brazilian modern pieces, like Sergio Rodriguez and Percival Lafer.

Courtney and Joy Newman are quite the husband and wife team. Courtney spent years working for Studio Service Film and Television for Neiman Marcus where he worked with Hollywood royalty like Barbara Streisand and Cher. His wife Joy has a claim to fame herself: earning a nomination for nothing special…just an Academy Award for film production!

While they both rubbed elbows with the Hollywood elite, they had a burgeoning passion for modernism and sold vintage mid-century modern pieces out of their garage. After the Oscar nod, Courtney and Joy decided that they wanted a change of scenery and moved from Los Angeles to Palm Springs. There, they opened up Modernway, now a must-visit local fixture for over 20 years. Courtney is a true modernism conservationist and is both the founder and President of the Palm Springs Modern Committee.

Courtney and Joy specialize in unique pieces (like 20-foot sofas) and hard-to-find, unusual objects are their forte. Right now, he’s seeing a definite uptick in sales with organic California design; Lou Hodges, Don Shoemaker, and Cleo Baldon are some of his trending designers.

We’re currently obsessed with their Arthur Elrod dining set with seating for 12 that was featured in a design book. Their current offering also includes a giant Gary John aluminum fireplace that came from a house designed by William Cody, and a super rare Claritone Project G stereo system. You can also shop their collection at Instagram @modernway or on Chairish.

Graham Loper has always been a purveyor of all things vintage and antique. From a young age, Graham developed a love of antiques and antique malls from his grandmother, who had a makeshift antique shop in her home. From the age of five, Graham and his family rarely passed an antique mall without stopping; a tradition that he still adheres to today.

Graham is a true collector at heart, so it was only natural that seeking out treasures would become a lifestyle for him. The hunting, buying, and exploring are not only a means of catharsis for him, but have translated into a thriving business.

Interestingly enough, he met his business partner Noah when he went to buy a sofa. It turns out that Noah was there to purchase the same sofa. After conferring for a few minutes, they decided to go halfsies instead of bidding each other up. They then consigned that sofa to an auction house and a partnership was born. They’ve been working together ever since, and opened Whatever Gallery as a duo in 2019.

Noah and Graham bring a unique perspective to the design world because rather than buying from pickers, a common dealer practice, they source their items personally and can provide history, context, and an accompanying story for most of their pieces.

A trip to Whatever Gallery is truly a visual feast. Graham and Noah have thoughtfully curated every single piece to create a cohesive image layered with texture, style, and color. While their main focus is on higher-end mid-century modernism, they also believe in incorporating antiques and newer items for an eclectic look.

Tim Shaffer and Kate Aldrich are the owners of Patina Décor, and definitely qualify as a power couple. While living in Denver, Kate was a globetrotter and designed custom plates (dinnerware) for a European company that catered to top chefs, restaurants and 5-star hotels. Tim, a former mountain bike racer, dreamt of opening a store specializing in high-end mid-century modern furniture. When the economy started tanking around 2009, they decided to make the move to Las Vegas, where they opened Patina Décor.

Patina Décor has now been a fixture and destination on Main Street in the heart of the Las Vegas Arts District for nearly a decade. Tim is really the heart and soul of their vintage furniture offering and Kate has a very keen eye for vintage clothing.

While Patina’s main focus is on mid-century modernism, Tim enjoys mixing in a lot of Hollywood regency, postmodernism, and even art deco. Noting the trends in lighting, Patina has carved out a solid niche in the vintage lighting world. They recently sold a piece to Dakota Johnson, which can be seen in her recent Architectural Digest feature from March 2020.

Jonathan Wayne is quite the renaissance man. After living in three different countries, it was in Seattle, WA where the mid-century modern bug bit him. At the time, he was working as a painter and sculptor in his gallery Soul in the Wall and living in the back studio.

One day, he happened upon a vintage sofa that he thought was cool and decided to buy it with the thought of reselling it. He was immediately hooked. Not long after, he moved to Phoenix and opened Red Modern Furniture.

Since 1996, Red Modern furniture has been specializing in rare and unique pieces of modernism. Jonathan takes pride in discovering local Southwest talent that may have previously been under appreciated, like Jackie Carson, Dick Seger, and Alan Ditson.

With Jonathan’s creative background, he brings an artist’s eye to the design landscape and while focused on modernism, he has a truly deep appreciation for studio pieces. George Nakashima, Philip Lloyd Powell, and Wendell Castle are some of his favorite studio craftsmen.

Going into Red Modern, you should expect nothing but the best. Jonathan is a purist and believes in the heart and soul of his pieces, always choosing quality over quantity. Being a fixture in the community for more than 20 years, he’s had a lot of the same clientele over time and cherishes the interaction with his regulars. He loves his customers, the stories they bring with them, and that he’s a part of their lives through these incredible pieces of furniture.

Right now, we’re gushing over his Vladimir Kagan Erica chaise, Alan Ditson studio desk that’s one of a kind, and a gorgeous Jack Zajac ram sculpture. You can also shop his collection at Instagram @redmodern , on Chairish and 1stdibs.

Looking for more insight into investing into mid century vintage? Check out this post on how to pick the right piece to invest into.

Malena Brush has owned mid century modern furniture galleries in CA, NV and AZ. She currently owns and operates Habitat Gallery, a luxury mid century modern furniture gallery in Tempe, AZ. After graduating with a BA in communication, she waded into the world of modernism and never looked back. She now spends her days buying, selling, and researching modern design. She can be found on 1stdibs, Chairish and Instagram @habitat_gallery.