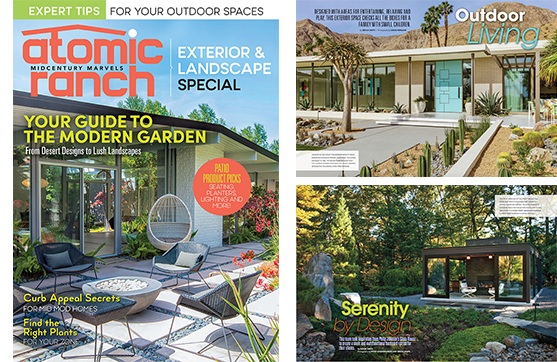 In the late 1950s, working men across America would come home in the early evening and kick back with a cocktail before dinner. Sitting in high-back chairs and sipping on bourbon, they listened to recordings by Frank Sinatra, Etta James and Ella Fitzgerald as the cares of the day melted away.

Homeowners David Haggard II and his partner Tommy Sawyers carry on this tradition, relaxing most evenings in the hi-fi lounge of their 1958 Dallas, Texas, space-age home surrounded by the creature comforts of a bygone era.

“We’ve always been crazy about Midcentury Modern and collected midcentury furniture,” says David, who 10 years ago moved with his partner from Kentucky to the Lone Star state to further their careers in healthcare. After building a custom home on the lake in Fort Worth, the couple received a purchase offer they couldn’t refuse just 10 weeks after moving in, and soon began their quest for a house that fit their retro style.

David kept returning to Sparkman Club Estates, a cozy neighborhood in northwest Dallas with dozens of picturesque, ranch homes built in the late 1950s. Although well maintained, few have the classic midcentury style of David’s residence, which was designed by Arch Swank, Jr., an innovative figure of Texas architecture.

“The house was featured in the 1958 Parade of Homes,” David says proudly, adding that the publication highlighted its design conducive to “indoor/outdoor living for the modern family.”

The property was one of only a handful of residences designed by Swank, who is better known for his commercial projects, including the Preston Center branch of Neiman Marcus (1952), the semiconductor complex for Texas Instruments in Richardson, Texas (1958), and the Great Southwest Corporation’s industrial park in the neighboring city of Arlington (1958). Drawings for the Sparkman Club house are on file amid Swank’s works at the University of Texas–Austin Library, and David has a copy of the original blueprint.

To learn more about the home’s history, David tracked down the original residents, two of whom still live in the area. Marianne Edwards Montoya was only 18 months old when she and her family moved into the property. Her father designed cockpits and frequently traveled back and forth between Dallas and Houston for projects with NASA. He remarried after his first wife passed away, and in 1967, he built an addition as a piano studio for his new bride, which today is the master bedroom.

The remainder of the house retains its original footprint, with skylights and floor-to-ceiling windows flooding the space with natural light. However, the interior has been twice remodeled, with the most recent owner taking it down to the studs to create a more open floor plan between the kitchen, dining and living spaces. “It’s like having a brand-new house with everything we like,” David says.

The things he likes includes a collection of Sputnik-era memorabilia, from framed prints of LIFE magazine featuring the first astronauts and their wives to model rockets that sit atop a tall midcentury bar. The rest of the home is meticulously decorated with vintage and reproduction furniture and home accessories, including loungers by Eames and Mulhauser, Majestic Z boomerang table lamps, rare 1950s Mirro Medallion candlesticks, and an original painting by Modernist artist Charlie Harper. On the back patio, a vintage Ames Aire patio set and chaise lounges provide a place for guests to relax by the pool.

“We like to mix original furniture with some of the newer stuff, because you can get great quality now, and all these midcentury lines have come out,” David says, admitting that his affinity for acquiring new finds borders on obsessive. He quips, “We keep waiting for it to not be popular, so we can actually buy the things we love.”